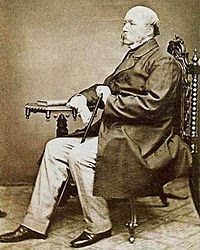 John Gardner Wilkinson was born in 1797, the son of John Wilkinson, a clergyman, of Hardendale in Westmorland, and Mary Anne Wilkinson (ne Gardner). Through his mother he was related to the Crewe family of Calke Abbey in south Derbyshire; Georgiana Crewe (ne Lovell, c.1824-1910), wife of the ninth baronet Sir John Harpur Crewe (1824-86), was his second cousin.

Wilkinson's mother and father had died by the time he was ten years old. He was entrusted to a guardian, and was educated at Harrow and at Exeter College, Oxford. His love of travel began with visits to the Continent in 1817 and 1818. In 1819 he set off on a 'Grand Tour' through France, Germany, and Italy, where he met the antiquarian and student of Egyptian hieroglyphics, Sir William Gell. Gell encouraged Wilkinson to engage in Egyptological study under his guidance; and in October 1821 Wilkinson left Italy for Alexandria.

Wilkinson remained in Egypt until 1833. He travelled extensively in that country, learnt Coptic and Arabic, continued his study of hieroglyphics, and surveyed and recorded the remains of ancient Egyptian society, notably the tombs at the site of Thebes. He began to publish his research, and continued to do so after his return to England. Manners and Customs of the Ancient Egyptians, his most extensive work, was first published by John Murray in two series in 1837 and 1841; a second edition appeared in 1847. This work enhanced Wilkinson's reputation as an Egyptologist, which resulted in his knighthood in 1839, and in membership of many learned societies.

He revisited Egypt four times: in 1841-2, 1843-4, 1848, and 1855-6. Partly because of these visits, as well as through undoubted inclination, he also travelled widely in Western Europe and the Mediterranean, and in the early 1840s toured Dalmatia and Montenegro, part of Asia Minor, the Levant and North Africa. (John Murray published Wilkinson's account of his travels in the Balkans as Dalmatia and Montenegro in 1848.)

In 1856 Wilkinson married Caroline Catherine Lucas (1822-81), a keen botanist and antiquarian, the companion of Augusta, Lady Llanover. The couple lived first at Tenby in Pembrokeshire, on the South Wales coast. In 1866 they moved to Brynfield House, at Reynoldston on the Gower peninsula. Brynfield and the surrounding area provided Wilkinson with ample opportunity to indulge his interest in ancient British remains; he had already published several articles on British archaeology and antiquities.

Wilkinson's Egyptological work contributed to the foundation of that discipline in Britain, but his research and publications ranged beyond Egypt into architecture, aesthetics, international relations and the classics, as well as travel and the study of ancient Britain. Moreover, in his detailed water-colours and drawings, as in his extensive notes and 'journals', he recorded his impressions of the architecture, costume and contemporary society of all the countries he visited.

On his death in 1875 Wilkinson's library and papers were bequeathed to Sir John Crewe and his family, and were sent to Calke Abbey. It was known that his publications represented only a small proportion of his work, and interest in his papers continued. In 1925 many of the manuscripts relating to Wilkinson's Egyptological research were lent to Francis Llewellyn Griffith, professor of Egyptology at Oxford; after Griffith's death in 1934, these items passed with his library to the Griffith Institute in Oxford. They were used by Bertha Porter and Rosalind Moss in the preparation of their Topographical Bibliography of Ancient Egyptian Hieroglyphic Texts, Reliefs and Paintings (Oxford, 1927-51; revised and reissued, 1960-95), and were given reference numbers used in that work.

In 1984 the National Trust became the owner of Calke Abbey and its contents, including all Wilkinson's manuscripts, which were soon afterwards placed on deposit at the Bodleian and which this catalogue describes. (Wilkinson's library remains at Calke.) They were used by Professor Jason Thompson in his biography of Wilkinson (Sir Gardner Wilkinson and his Circle, Austin, Texas, 1992).

Further details with regards to his papers can be found at:
http://www.rsl.ox.ac.uk/dept/scwmss/wmss/online/1500-1900/wilkinson/wilkinson.html#introduction
Posted by Lorraine Evans at 11:47 am