NEW TOMB FOUND IN THE VALLEY OF THE KINGS

The tomb of Amun Re singer Ni Hms Bastet was discovered in the Valley of the Kings on Luxor’s West Bank. A deep burial well was found during a routine cleaning carried out by a Swiss archaeological mission on the path leading to King Tuthmosis III’s tomb in the Valley of the Kings. The well leads to a burial chamber filled with a treasured collection of ancient Egyptian artefacts.

Mohamed Ibrahim, Minister of State for Antiquities, said that further inside the chamber, excavators stumbled upon a wooden sarcophagus painted black and decorated with hieroglyphic texts, and a wooden stelae engraved with the names and different titles of the deceased.

Early studies carried out by the Swiss team revealed that the tomb dates back to the 22nd Dynasty (945-712 BC) and it belongs to the daughter of Amun Re, lecture priest in Karnak temples and also the singer of the God Amun Re.

Excavations are now in full swing in order to reveal more of the tomb’s treasured collection. 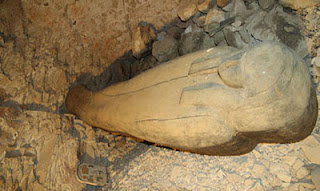 Posted by Lorraine Evans at 4:12 pm