On the Pictish Trail

Well as the summer is fast approaching and my rather nasty 'injury' is finally healing, I have decided to devote my time to visiting as many small museums and archaeological trusts as I can muster. So for my first foray I would like to introduce you to this remarkable little museum on the North-East coast of Scotland - the Groam House Museum - which I visited recently when it opened its doors for the new summer season. 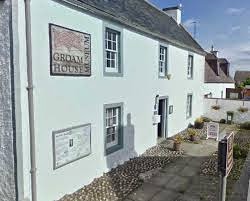 The Groam House Museum, the word Groam is an old term for a bog or marshy place, can be found in the small village of Rosemarkie in north-east Scotland. It is an award winning local museum, renowned for its collection of  Pictish stones, many of which were discovered in the adjacent old burial ground. Very little is known about the Picts, named first by the Roman invaders, their territory extended from the Northern Isles of Orkney and Shetland to the heartland of Scotland. 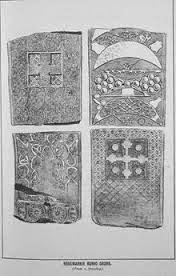 The centre piece of the collection is the beautifully-carved Rosemarkie cross-slab, thought to date to the late 8th century. A 19th century black and white etching is shown left. Although it is unclear where it was originally erected, it had been placed in and outside the local church at times, it was given to the Museum in 1980 for safe keeping. Currently reaching a height of 2.9m x 0.75m x 0.18m, this particular cross slab is carved on both sides in shallow relief, Christian symbols of the front, Pictish markings on the back, whilst the bottom is buried in a concrete base. The top part of the slab is now missing. The 'Rosemarkie Cross' is rather unusual as both of the narrow sides of the stone are also carved with ornament, filled with interlaced serpent-like creatures and strange fish like animals. 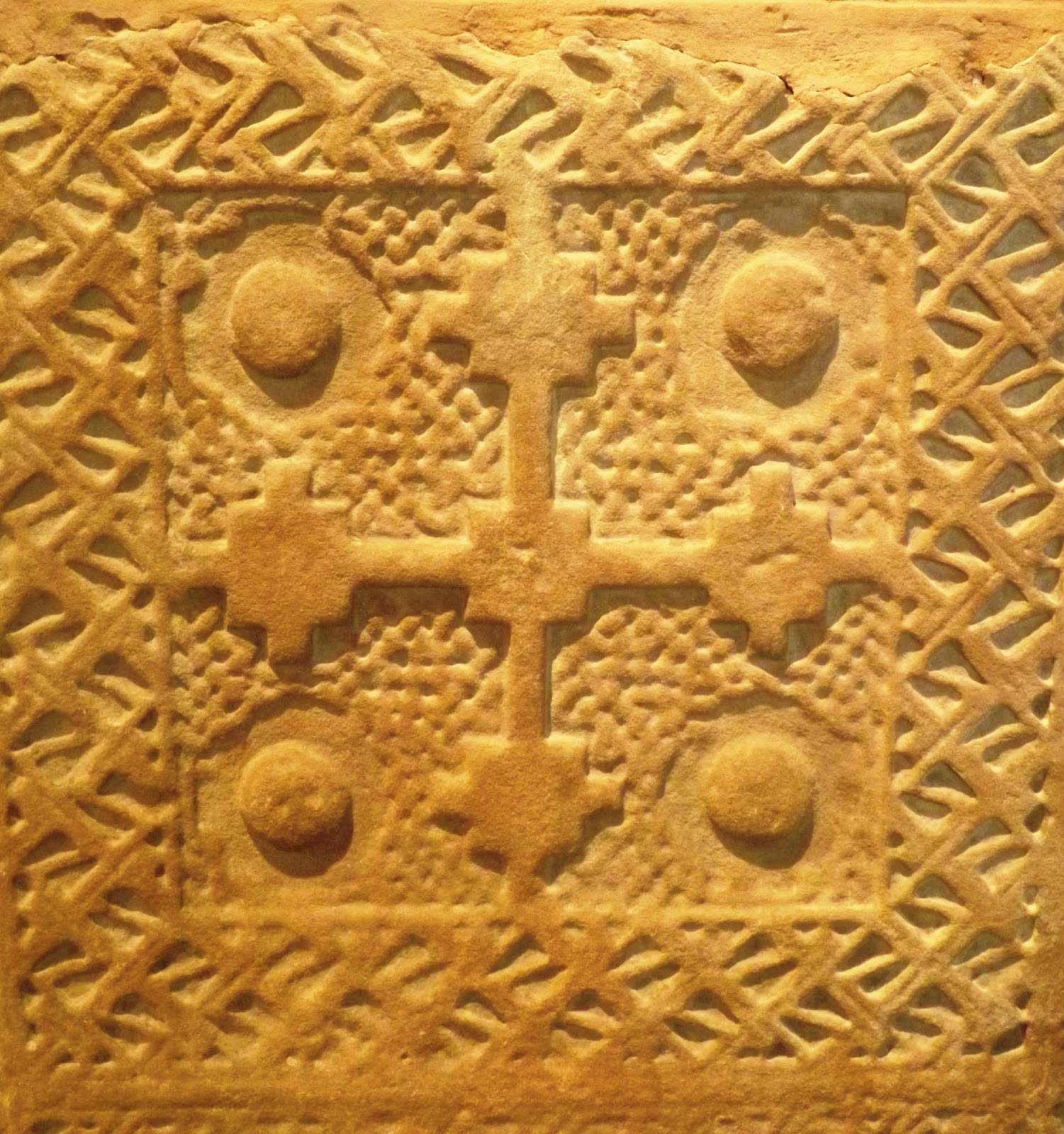 A close-up section of one of the Rosemarkie Cross panels, to the right, illustrates the excellence of Pictish craftmanship. This particular panel sits in the middle of the carved stone, on the back of the slab, and consists of an equal-armed cross, placed within a deep border of a key type pattern. The cross itself has a square placed in the centre of the design together with a series of stepped terminals. The background of the cross is filled with a fine interlace pattern, which continues throughout the middle panel. 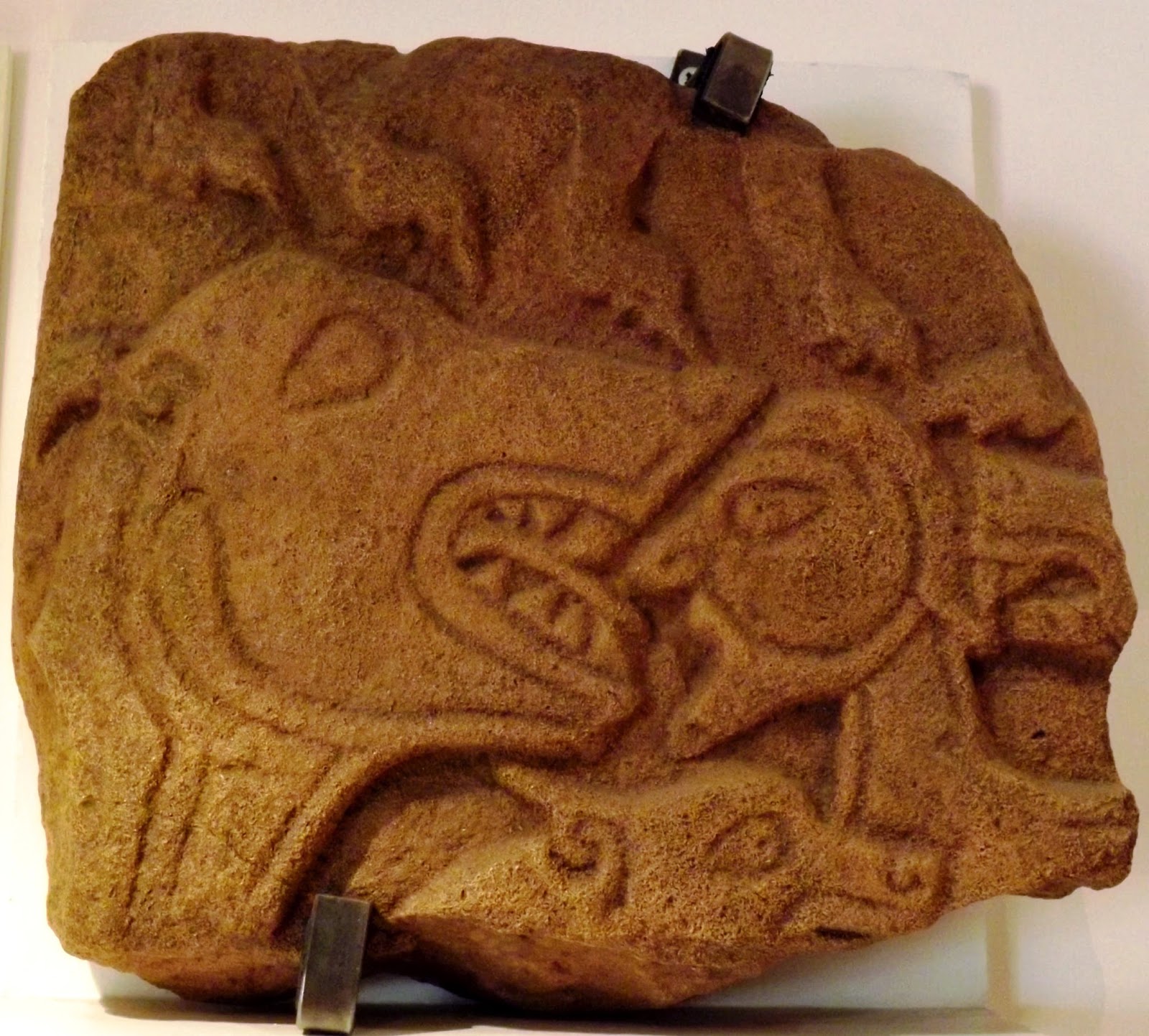 Though the Rosemarkie Cross is without question the highlight of the Museum, and takes centre stage in the gallery, there are a number of other fine Pictish stones and slabs on display. One is in fact a cast, the original artefact was found in the adjacent churchyard and was presented to the Society of Antiquaries of Scotland in 1885. It is now in the care of the Museum of Scotland in Edinburgh. Measuring 250mm x 270mm x 70mm, and decorated on only one side, the relief it depicts a bearded man surrounded by five wolf-like beasts. Some have argued that this particular scene may represent the biblical Daniel in the Lions Den but Pictish experts think it is more likely that the carving is more likely to represent a native heroic story of some kind. 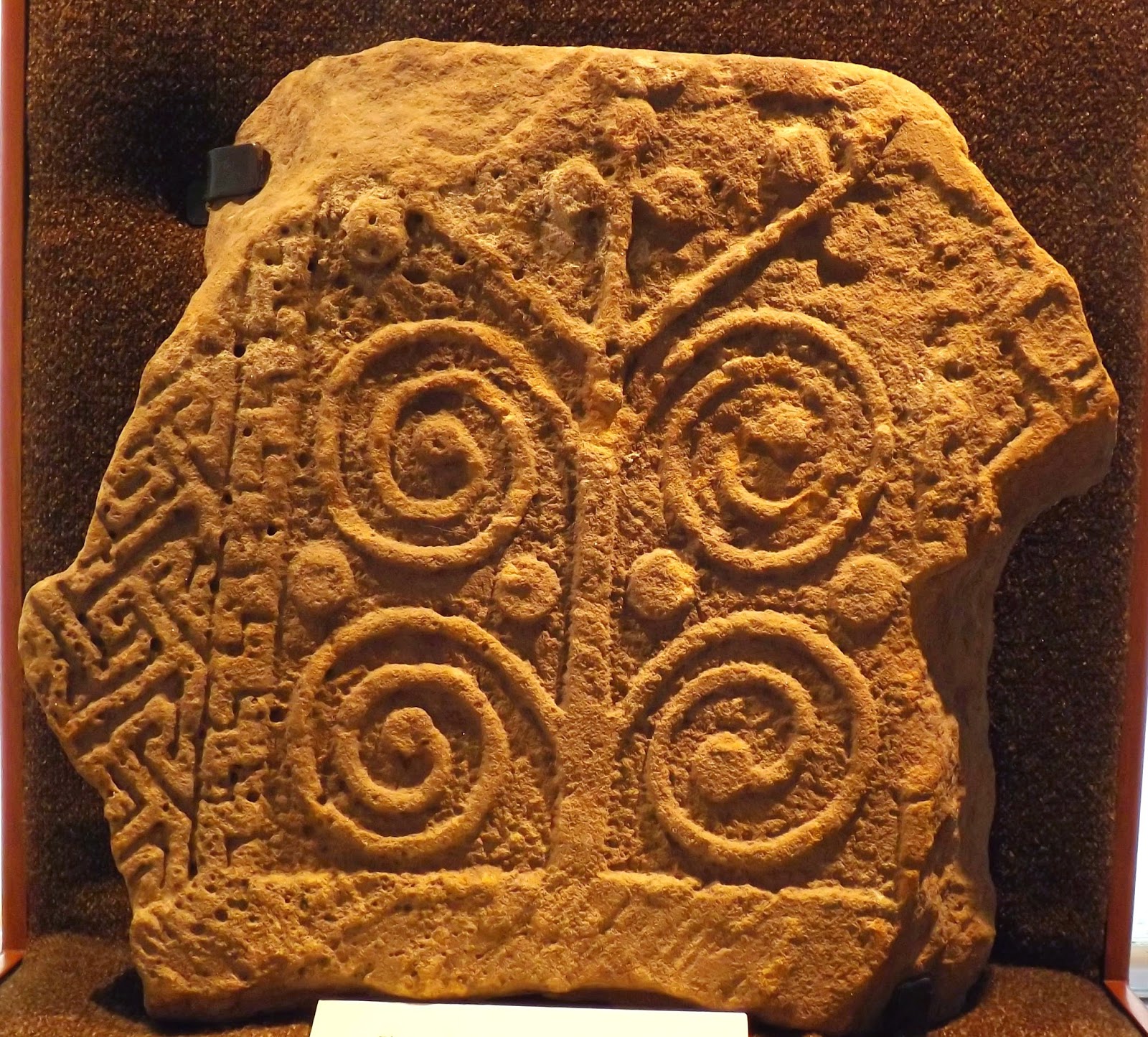 Situated in another corner of the museum is a larger carved relief, this one has a rather more Christian feel to it. Measuring 488mm x 530mm x 113mm, again it was uncovered in Rosemarkie Churchyard in the late 19th century. The accompanying information states ' the decoration consists of a stylised plant with two pairs of tightly coiled shoots ending in lobes, growing from a central stem. The stem itself terminates in a triple arrangement of stylised fruits. The plant is framed on the two vertical sides with an edging of a simple key-pattern. The bottom border is gently curved so as to give an impression of a shallow mound. The lower moulding is plain and there are traces of what may be a similar moulding just above the plant'.

This particular fruit-like design is often referred to as a vine-scroll pattern and reflects the passage in the Gospel of St. John, Chapter 15, where Christ compares Himself to a vine, and his disciples to its fruit, each dependent upon each other. The grapes of the vine also relate to the wine associated with the Sacrament of the Eucharist into the Blood of the body of Christ. 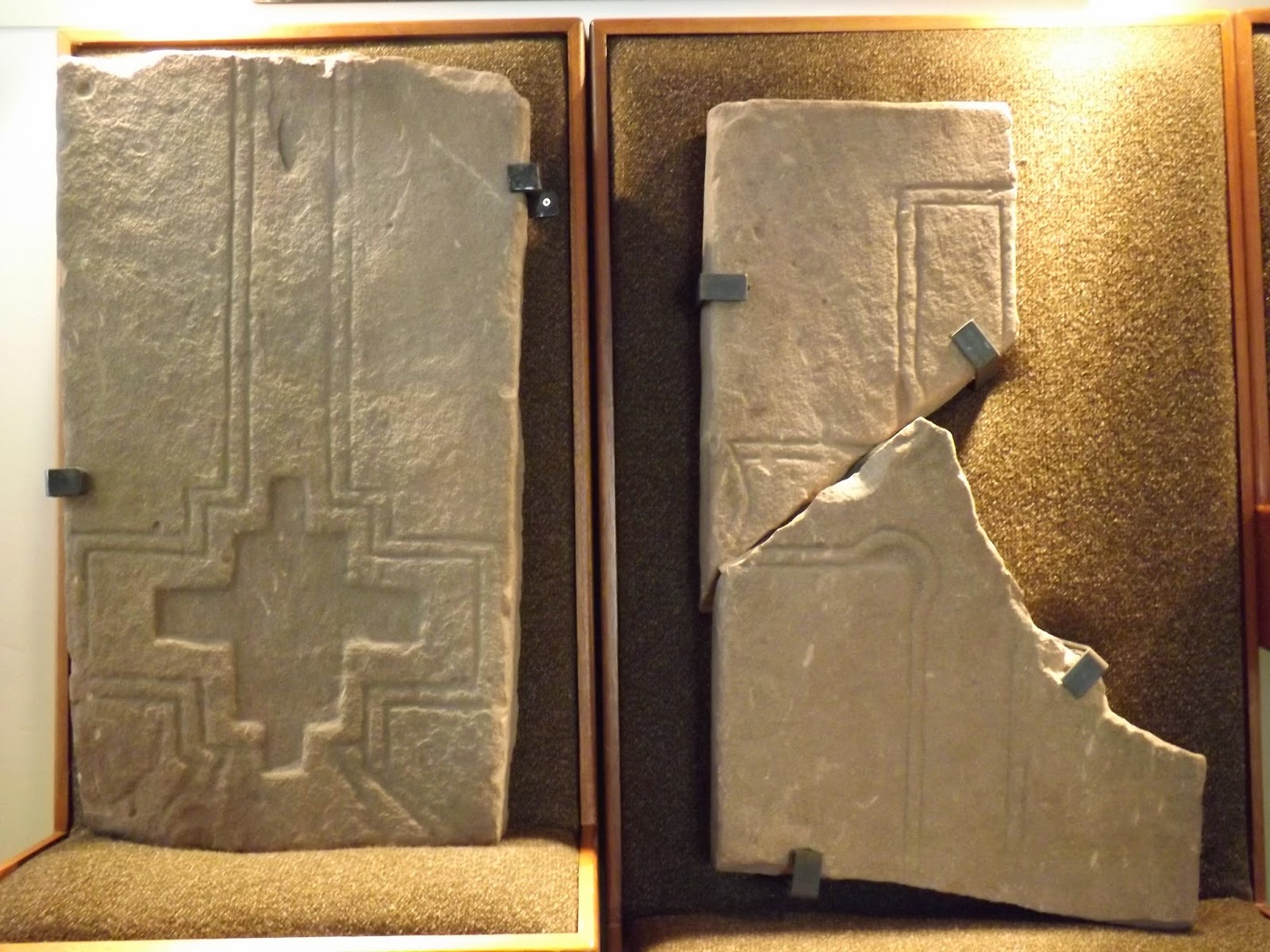 The final example I would like to share with you all is perhaps my favourite artefact in the museum, which may be somewhat surprising considering its lack of decoration. However, I have a penchance for so-called 'Cavalry Stones' come gravemarkers and recently had a article published with regards to their design and origins (see my website for further details). It may not surprise you to discover that this rather early 9th century example was found, yes you've guessed it, in Rosemarkie Churchyard in the late 19th century (oh to be a grave-digger in Rosemarkie during this time period!) Originally displayed as three individual fragments, it soon became apparent it was in fact one singular slab, probably a recumbent funerary slab. When joined together this impressive stone measures a whopping 1461mm x 448mm x 93mm and consists of an incised double-outlined shafted cross, with curved hollows at each arm, terminating in a complex cruciform stepped base. A recessed panel follows the contours of the base. There is no carving on the back of the stone and if you look closely you can still see the original tool marks at the bottom.

So there you have it folks. A wee peak at a rather splendid collection of Pictish artefacts on display at present at the Groam House Museum. In addition to which there is a replica Pictish harp, a collection of Pictish symbols for people to create their own designs, a comprehensive collection of photographs of Pictish stones in Scotland for research purposes. and a well-stocked museum shop. Admission to Groam House Museum if FREE, opening hours are Monday-Friday: 11am - 4.30pm, Saturday and Sunday: 2pm - 4pm. Further details can be found on their website at www.groamhouse.org.uk

Posted by Lorraine Evans at 3:45 pm