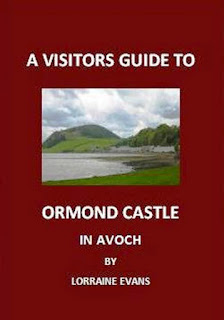 Ormond Castle was a mighty stronghold, overlooking the coastal village of Avoch on the Black Isle. Home to the De Moray family, the castle became a focal point during the initial Scottish Wars of Independence against the English King Edward I. The head of the family, Andrew de Moray, became the leader of the rebellion in the North, eventually combining his forces with those of the legendary William Wallace and became, with Wallace, 'Joint Commanders of the Army of the Kingdom of Scotland'. Each year the official De Moray standard is raised high above the castles ramparts to celebrate the feats of Andrew de Moray.

A 'Visitors Guide to Ormond Castle' has been especially designed to appeal to the download market. It provides a comprehensive, yet condensed overview of the historical and archaeological matter complete with directions and images.A Visitors Guide to Ormond Castle is available on Kindle, PC Download, Android, Smartphones, Blackberry etc
Posted by Lorraine Evans at 6:59 pm