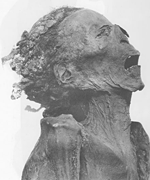 In 1886 Gaston Maspero, head of the Egyptian Antiquities Service, began the process of unwrapping the royal mummies discovered in a cache at Deir el-Bahri, near the Valley of the Kings. Whilst opening a simple, plain coffin Maspero found something that shocked and surprised him. Inside the coffin, wrapped in a sheepskin, a ritually unclean object for ancient Egyptians, was a young man, hands and feet bound, who appeared to be screaming. There were no inscriptions upon the coffin to aid identification. There was no incision on the left abdomen, whereby the internal organs would be removed. The occupant of the coffin had not been afforded the traditional mummification and, as such, Maspero was convinced there had been foul play:
All those who saw him first hand thought that [he] looked as though he had been poisoned. The contraction of the abdomen and stomach, the desperate movement with which the head is thrown back, the expression of excruciating pain spread over the face hardly allow for any other explanation……….
Others agreed with Masperos initial assessment. The physician who examined the mummy at the time, Daniel Fouquet, agreed that he had been poisoned and stated, "the last convulsions of horrid agony can, after thousands of years, still be seen." A chemist named Mathey, who did some analyses on the mummy, felt that "the wretched man must have been deliberately asphyxiated--most likely by being buried alive." Later examination by the anatomist Grafton Elliott Smith dismissed such claims and he wrote in his The Royal Mummies (1912) that "a corpse that was dead of any complaint might fall into just such an attitude as this body has assumed." But who was this mysterious mummy, denied his name, denied proper burial according to Egyptian rites, yet found amongst some of the most important rulers in Egyptian history? Maspero suggested that the mummy was that of Prince Pentewere, the son of Ramesses III (1185-1153 B.C.) who was involved in the now infamous ‘Harem Conspiracy’ against his father. The conspirators, including Pentewere, were caught and either executed most brutally or allowed to commit suicide. Would, however, such a heinous individual be allowed to be buried with the royal family?
In 2004, the anatomist Dr Bob Brier was given permission to examine the ‘Unknown Man E’. After detailed analysis he stated that whilst he could not prove the mummy was that of Penteware, this particular identification did fit the curious facts of the case. In September 2011, although holding no official position within the Supreme Council of Antiquities in Egypt, the ex-minister Dr Zahi Hawass announced, in a satellite broadcast link, that DNA tests had been completed on both the mummy of Ramses III and the Unknown Man E mummy, results of which confirmed that the later was indeed a son of the aforementioned Pharaoh. Could this prove that the Unknown Man E mummy really is Penteware? Not quite. Unfortunately, rather than publish these exciting results in a reputable academic/scientific journal for the world to analyse, Dr Hawass chose to announce the results in a ‘mistakes galore’ Discovery Channel documentary!!! Some things never change, do they?!!
Posted by Lorraine Evans at 7:16 pm