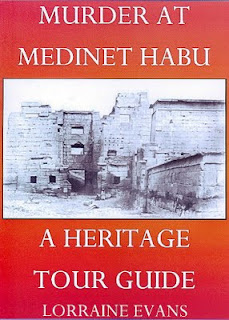 Throughout Egyptian history only a handful of rulers can be considered truly remarkable kings. Of these Ramses III, the second ruler of the Twentieth Dynasty, was the last great pharaoh to sit upon the throne. His reign was one of considerable turmoil, both at home and abroad, and culminated in one of ancient Egypt's darkest episodes, his eventual assassination at the hands of his harem women.

Murder at Medinet Habu is a unique and entertaining heritage tour whose aim is to make history come alive. By following a series of illustrated landmarks the reader is catapulted into the world of Ramses III, a world of death, magic, bribery and intrigue. It will also enable the reader to follow in the footsteps of the early excavators as they discover a host of secrets buried deep within the sand.

No visit to any ancient Egyptian temple would be complete without the obligatory ghost story. Medinet Habu does not disappoint. The chambers to the north and south, directly behind the Holy of Holies, are long, silent and very dark. As such, there have been a number of reported sightings of unexpected guests appearing from seemingly nowhere and then vanishing in front of peoples very eyes! Make your way into the north chamber and, whilst facing the back wall, take a sly glance to the left. Because it is here that a ghostly figure dressed all in white, some say resembling an Egyptian priest, has been seen to walk right through the solid wall and into the chamber next door. Whereas if you now walk into the adjoining south chamber many visitors have reported a constant tapping sound, like a hammer banging repeatedly on stone. Move outside the chamber and it is said the tapping will cease. Go back into the chamber and the tapping reportedly starts up once more. Can you hear it?

Email ThisBlogThis!Share to TwitterShare to FacebookShare to Pinterest
Labels: Murder at Medinet Habu - A Heritage Tour